It is NTIA's responsibility to administer changes to the "authoritative root zone file": the database that matches Internet domain names to IP addresses. IP addresses are the series of numbers that are the true "addresses" of devices connected to the Internet.

Since 1999, NTIA has carried out its responsibilities through a contract with the Internet Corporation for Assigned Names and Numbers (ICANN), along with a co-sponsorship agreement with VeriSign. NTIA's contract with ICANN expires on Sept. 30, 2015. It is NTIA's intent, announced on Friday, that a new regime be in place when the contract expires.

To begin this process, NTIA has asked ICANN "to convene global stakeholders to develop a proposal to transition the current role played by NTIA in the coordination of the Internet's domain name system."

The following are preliminary answers to questions trademark owners may have about this process.

1) How will this change affect the domain names we own?

No change is anticipated to the ways that domain names are acquired, transferred, maintained or contested. In its own press release Friday , ICANN stated "the roles of the Internet technical organizations, including ICANN's role as administrator of the [domain name] system, remain unchanged." However, the extent of change to ICANN's role, who will oversee ICANN and how, will not be known until a structure is proposed to replace the existing contract.

NTIA advised in a separate Q&A that VeriSign's role as manager of the rest of the "root zone" will be affected by the NTIA handoff. NTIA anticipates having to "coordinate a related and parallel transition in these responsibilities."

Nevertheless, no changes are anticipated to administration of .com domain names. VeriSign operates the .com registry under a separate agreement between it and ICANN. While that agreement, too, may eventually change, it will not be driven by NTIA's current initiative.

2) How will this change affect disputes between trademark owners and domain name registrants?

It is highly unlikely that there will be any short-term or even medium-term effects on the processes for resolving disputes between trademark owners and domain name registrants. Significantly, neither NTIA nor ICANN have mentioned the Uniform Domain Name Dispute Resolution Process (UDRP), the international dispute resolution process for some of the gTLDs, indicating that even if the dispute resolution process is eventually to be administered by others, the process has not been singled out for change.

One area where the US has been able to exercise authority over individual domain names is by judicial control over the root zone server, the central registry where the authoritative version of the DNS is physically maintained. Using the Anti-Cybersquatting Consumer Protection Act, US trademark owners can circumvent international dispute resolution entirely, even over domain name registrants and registrars outside of the United States. An owner of US trademark rights can obtain a federal court order against VeriSign, operator of the authoritative ("a") root zone server, to deposit a domain name into the registry of the court. If the court determines that the domain name violates US trademark law, the court can then direct that the domain name be transferred to the responsibility of a US-domiciled domain name registrar, where the court can then order the domain name to be cancelled or transferred to the trademark owner.

One way that a multi-stakeholder authority over the DNS could avoid US courts' authority would be to establish the "authoritative" root zone server in another country, where it and its operator are not subject to the jurisdiction of a US court.

3) When is the handover supposed to happen?

ICANN has released its own timetable for implementing the handover from NTIA to the new multi-stakeholder organization. The process is set to begin with a "community-wide dialogue about the development of the transitional process" at ICANN's 49th Public Meeting in Singapore from March 23-27. ICANN, at least, anticipates that the process will be complete once its contract with NTIA expires in September 2015.

If past history serves as an indicator, however, less-ambitious projects such as the recent rollout of new generic top-level domains have experienced numerous delays, both for technical reasons and for the inability to achieve consensus among the many stakeholders in the process: governments, non-governmental organizations, domain name registrants, domain name registrars, trademark owners, and a full alphabet soup of acronyms for groups with technical, property or other interests. Because what is at stake is control over the Internet naming system, and how traffic is directed – or not – to every address on the Internet delays in completing this process are perhaps the only certainty.

You can also visit us online at www.btlaw.com/intellectualproperty. 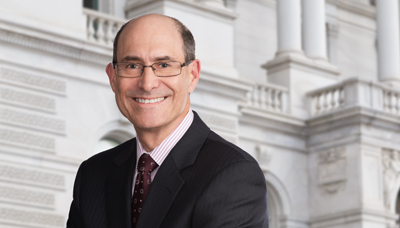