INDIANAPOLIS – Former Indiana Senate Majority Leader Brandt Hershman has joined Barnes & Thornburg LLP’s Washington, D.C., office as an of counsel attorney in the firm’s Government Services and Finance Department. Hershman will be an integral member of the Federal Relations Group.

Hershman, who served 17 years in the Indiana senate before recently announcing his resignation, is widely recognized for his experience in the areas of tax, energy, telecommunications and agriculture.

“It is an honor to join a firm of Barnes & Thornburg’s caliber and I look forward to working with the exceptional attorneys who are counseling clients on issues critical to their businesses, such as taxes, economic development and infrastructure” Hershman said.

Hershman, who represented constituents in Senate District 7, focused his efforts on tax reform and economic development during his tenure. He led the effort to usher in telecommunications deregulation legislation that has brought more than $5 billion of investment in infrastructure throughout Indiana.

“We are excited to welcome Brandt to Barnes & Thornburg,” said Karen McGee, managing partner of the Washington, D.C. office. “His experience in public service and background in tax policy, telecommunications, and other areas will be a tremendous asset to our clients as a member of our growing Washington, D.C.-based Federal Relations group. It will be a privilege to work with someone who has had a huge impact on public policy throughout his 17-year political career. We congratulate him on his service to Indiana and look forward to working with him.”

In addition to serving in the Indiana Senate, Hershman previously served as managing partner and general counsel for The DeNovo Group. He also served as executive director of the Program on Continuing Education for Public Officials at the Indiana University Robert H. McKinney School of Law.

He also has served in several staff positions in the U.S. Congress and its members, including district operations director for the U.S. House of Representatives; press secretary for Buyer for Congress; and presidential writer in the Executive Office of the President in The White House.

A graduate of Purdue University, Hershman earned his law degree from the Indiana University Robert H. McKinney School of Law in Indianapolis. He also earned two executive certificates, one in comparative tax policy and administration from Harvard University Kennedy School of Government and one in finance and financial management services from Cornell University.

He is admitted to practice in the state of Indiana and before the U.S. Tax Court, U.S. Court of Appeals for the Seventh Circuit, U.S. District Courts for the Northern and Southern Districts of Indiana and the Indiana Supreme Court. 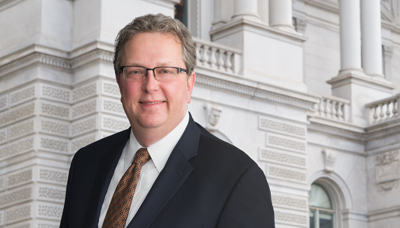