Jay Newton-Small has spent 15 years as a reporter covering the White House and Congress – she’s picked up a few useful observations about power and how women use it. Some of them are surprising behavioral changes that women leaders adopt that don’t actually serve them as they rise through masculine hierarchies – such as avoiding other women at events. Others are promising demographic shifts occurring with men that may make work and home fairer and more satisfying for everyone.

Newton-Small spoke in May at Barnes & Thornburg’s 7th annual Women in Leadership: Exploring Pathways event at the Nicollet Island Pavilion in Minneapolis. The event came amid intense focus on women’s experiences in the workplace and how leaders must create cultures that are fair and fulfilling for all workers.

Newton-Small along with speakers from the firm and community supplied valuable insights and information into these changing behaviors, along with where and how women are gaining ground in leadership positions, as well as, opportunities for discussion and networking among female business leaders from Minneapolis’ legal community and beyond.

In her keynote remarks, Newton-Small, author of “Broad Influence: How Women Are Changing the Way America Works” and a long-time Washington correspondent for Time magazine and CEO of MemoryWell, a network of journalists who tell the stories of people with Alzheimer’s disease. Barnes & Thornburg attorneys Connie Lahn and Dawn Rosemond also spoke to the attendees.

The speakers reflected on what each had learned from years of experience being a woman and observing women who attained positions of power and influence. Here are some of the key takeaways:

1. It’s OK to Sit Next to the Only Other Woman
Lots of women feel inhibited from connecting with each other at business events, said Connie Lahn, the Minneapolis office managing partner and host of the event. Countering that impulse, she convened a regular gathering of the four women on the Barnes & Thornburg management committee to talk about things that are important: family, feelings, business, what’s going right and what isn’t.

“Women leaders need to support each other, because otherwise it can be very lonely,” Lahn said.

2. “Critical Mass” and Women in Leadership
The U.S. Senate in 2013 was the first in which 20 percent of the members were women. That figure represented “critical mass,” in Newton-Small’s view, an idea with roots in nuclear physics and adopted by sociologists to describe the point at which a minority gains power within a group. In the civil service and upper-level political appointees, 30 percent were women when Newton-Small researched her 2016 book.

While the number of female voters dwarfs the number of male executives, that doesn’t mean voters hand women candidates elections. As Newton-Small noted, Donald Trump won 52 percent of white women’s votes in 2016. Women’s tendencies toward empathy can backfire in campaigns, Newton-Small said. A female voter may withhold her vote from a woman candidate under the rationale “I would not have done that if I were her, so I’m not going to vote for her,” while female voters don’t tend to put themselves in the shoes of male candidates, she said.

4. Economic Need Drives Social Change
As for issues such as parental leave, wage equality and child care, Newton-Small looks to the “Rosie the Riveter” era, when women poured into the workforce to fill positions left by men fighting in World War II. “We’ll make these moves when the economy demands it,” she said.

And, she said, the economy might demand it soon: by 2030 the U.S. economy will need many more young workers to support a burgeoning retired population. Meanwhile, younger men want to be more hands-on parents and not simply breadwinners. Each of these will expand opportunities for women to participate fully in the workforce, including in leadership.

5. Speak Up, Strategically
Dawn Rosemond, a partner and Director of Diversity, Professional Development and Inclusion at Barnes & Thornburg, closed the program by describing the strong temptation she had felt at a point in her career to stay anonymous, even when invisibility was a liability. “Women should be mindful of that impulse to be invisible, and counter it strategically,” Rosemond said. “Show them who you are. Make the effort to be visible and get credit for work when it shows you in your best light.”

Barnes & Thornburg recognized Dani Deering, general counsel at Lockheed Martin, who was presented with its Nancy A. Sullivan Community Leadership Award. The award recognizes a woman in the community who has achieved the highest level of professional excellence, exemplifies commitment to her community, is dedicated to helping others, especially women realize their leadership potential, and exhibits the qualities of partnership, integrity and perseverance. 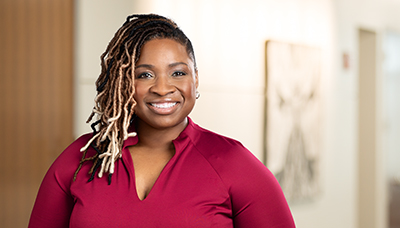