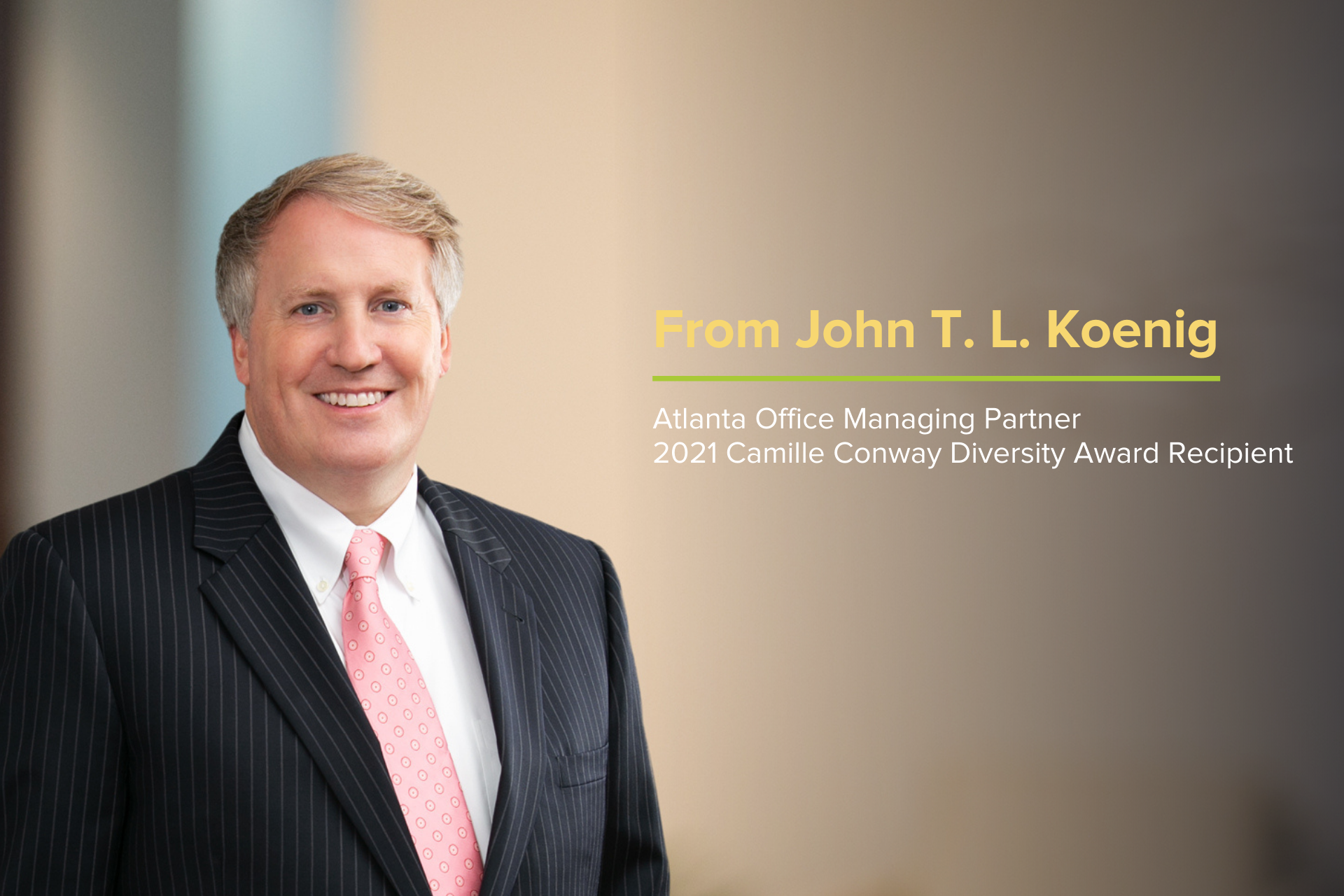 The firm’s Camille Conway Diversity Award is given each year to the Barnes & Thornburg teammate who most typifies the staunch commitment to diversity, equity and inclusion our late partner, Camille Conway, displayed day in and day out. Our 2021 recipient, Atlanta Office Managing Partner John T. L. Koenig, could not have been a more fitting selection.

Ordinarily, the prior year's recipient authors remarks to the firm in honor of MLK Day. In accepting his award though, John delivered such a poignant call to action that we thought the best thing to do this time around was to simply let you hear what he had to say. His remarks transformed the room. We believe they will do the same for you. Thank you John and congratulations again! To all, enjoy.

"Thank you so much, and thank you, Dawn, for those really kind words and thank you to Reina for nominating me. To be honest, you know, I was struggling a bit with what to say, somebody that looks like me getting a Diversity Award but I thought about it and I remembered the words of Dr. Martin Luther King Jr., who said, “In the end, we will remember not the words of our enemies but the silence of our friends.” And so I decided to share a quick personal reflection on two things I was thinking about yesterday because I don’t think there’s anything more personal than diversity and inclusion issues.

So yesterday was Veterans Day, celebrating people who have served and are serving, but I was also catching up on the trial in Georgia that’s going on right now, the three people who are accused of killing Ahmaud Arbery. And so it made me think about people who inspire me. 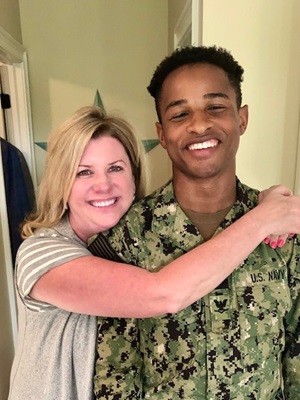 My wife, Julia, and I are really blessed. We’ve got three children, two by birth, one by adoption. And our middle son, Thaddeus, many of you have heard me talk about him. I’m very proud of all of our kids. Thaddeus is Black. He is serving our country right now – I’ve got my red, white and blue on – and is on active duty in the United States Navy. He’s stationed at the joint Military Cyber Command post at Fort Gordon in Augusta, Georgia. He’s called a CTN, which is a Cryptologic Technician Networks. So he just tells people, “I work on computers,” because he can’t really tell you anything else.

In his spare time, while serving the country full-time, Thaddeus earned his bachelor’s degree in information technology from Augusta University, and he’s currently enrolled at Augusta to pursue his master’s degree in cybersecurity. So Thaddeus, you know, to stay fit and things like that, he would run. That was his thing. He loved to run. And so, given his crazy schedule, he would have to get up early in the morning, zero dark-thirty as he would say, to run, or run at night when got home from classes. And so February 23 of last year, I think it was a day a lot of us won’t forget. I’m not going to forget the conversation Julia and I had that night with Thaddeus. He called that night – that was the day Ahmaud Arbery was killed doing the same thing Thaddeus did every day, out running through the neighborhood. Ahmaud Arbery was about a year older than Thaddeus. It was a tough conversation. And at the end, he said, “You know, Mom, Dad, that could have been me.”

And as painful as that was to hear and to think about, in my head I was thinking, that’s so rational. I mean, Thaddeus was stopped by the police in his own neighborhood before when somebody called and said they thought he looked suspicious. And so a few days later, he went out and bought a rowing machine and put it in the garage. So you think about that, here’s a young man – if he wasn’t my son, I’d still love him and be proud of him – that has top-secret security clearance, he works on the most sophisticated computer networks that the military has, and he had to make that sort of conscious decision to start working out in his garage instead of running through the neighborhood to protect himself.

And you think about that and the point I really want to make here is, I think the remarkable thing about that is how unremarkable that story is, when you think about it. There are so many of our friends, our family members, our colleagues at Barnes & Thornburg who have the same story. They go through the same things. And it’s not just headlines, right, that you read, get shocked, and then it fades into the news. It’s day-to-day life. It’s reality. And I think it’s far too frequent still, that people are judged by how they look rather than who they are and what they’re doing. And so, we definitely cannot ignore that reality. In fact, I don’t think we can just acknowledge it. I really think we have to, sort of, embrace it and hold it really close to our heart so that it will influence our actions and try to motivate us to do better. Thank you very much."

John Koenig: I Am Barnes & Thornburg

John Koenig elected to board of directors for Sandy Springs Mission