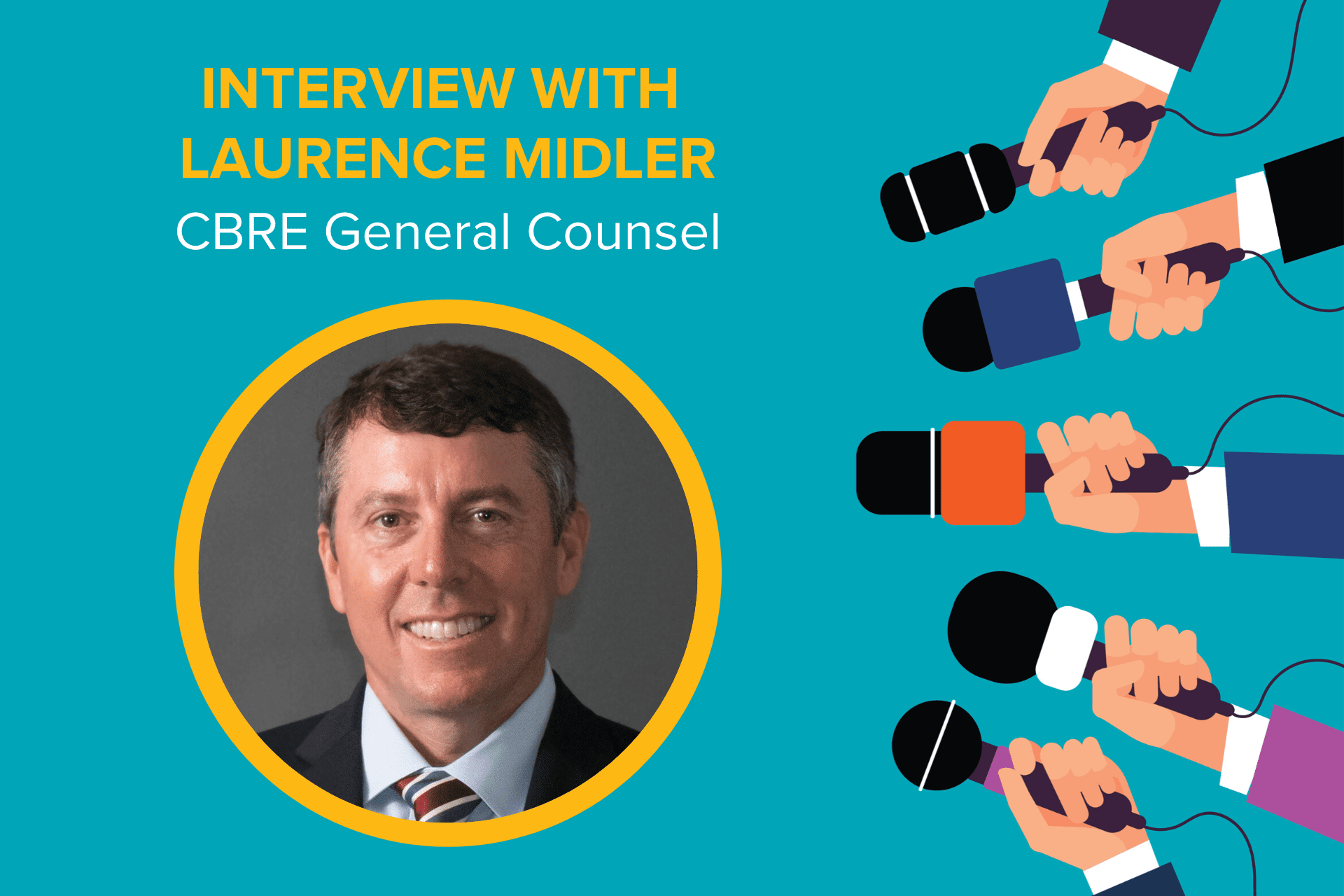 When CBRE General Counsel Laurence Midler took over risk management for the commercial real estate giant 12 years ago, the field was brand new to him. But as the company swelled from $1.5 billion to $20 billion in revenue, Midler grew right along with it, developing a deep understanding of compliance, enterprise risk management and insurance.

CP: Can you talk about your work as general counsel for CBRE, and the degree of responsibility you exert over its purchase of insurance and assertion of claims?

Laurence Midler: When my role changed in 2007, I was a relative novice in the field of risk management, but I was suddenly charged with overseeing a function that was buying tens of millions of dollars in insurance and had 20 different lines. We also maintained (and continue to maintain) a captive insurer, so I was immediately put on its board.

I was pretty green. You assume being a lawyer, you’d know about certain things, but not all lawyers work on matters with real insurance concerns. I was entrusted to learn and take it on, and now I feel like I’ve been around the block for a while. Given how much we’ve  grown – we’re cracking through the Fortune 200 – a lot of us who’ve been here for the past decade-plus have had to evolve to serve a company with much more sophisticated and diverse operations.

CP: Based on your own experiences and observations, what are the most significant insurance issues confronting CBRE today?

LM: By far the biggest challenge is professional indemnity coverage, and that’s because we’re in an industry that doesn’t have the greatest claims history. I’ve learned insurance relationships become much more stressful when you have claims. A large claim is like a scarlet letter, and it affects coverage dynamics as well as subsequent renewals.

We’ve never had a claim – other than the slip-and- fall variety – during my time with CBRE until the years after the Great Recession. Around 2010-11, we started getting hit by a spate of claims involving our valuation of commercial property at the top of the market in 2006 and 2007. We wrote tens of thousands of appraisals in the lead-up to the financial crisis, some on speculative development and raw land and change-of-use evaluations. Of the pre-recession valuations, we ended up with some lawsuits where properties that we had valued were ultimately sold for less or foreclosed. We started getting claims, some on the large side, as did the whole industry. Some competitors exited the business because they couldn’t get insurance.

Since then, we’ve had fewer valuation claims. The mouse made it through the snake, as they say, as those claims matured and were resolved. But even though they have been resolved, we then had a few other large non- valuation claims. And now we’re facing renewals in the context of a very difficult premium-to-claims ratio, and insurers generally want to stick around only if they can get higher premiums to compensate them for past claims payments. They also look to increase deductibles above the level where they would expect claims.

CP: How important is it to keep insurers apprised of information related to claims?

LM: We spend a lot of time and effort keeping them apprised. When claims hit our policy, when they hit the primary limit, we’re in constant communication with insurers. The ability to go to insurers and say “We’d like to settle this claim and we’d like you to pay” depends on your relationships with the insurers’ claims professionals – and how much they trust that you have done everything they want you to do. The worst-case scenario is calling and telling them we want to settle a case and the insurers don’t have information to evaluate because we haven’t kept them apprised. We take pains to keep our relationships as strong as possible, and yet, sometimes, the insurers still say they don’t have enough information.

That’s not a good situation for us, but it’s an obligation we must get resolved. The insurers sometimes will hire outside litigators at that late stage, and then we’re dealing with a whole new set of skeptics and a new set of requests for information. This is the art and science of insurance claims handling. You’ve got to keep a smile on your face and play ball, because, ultimately, you need the insurers to cover.

CP: Talk about the client-law firm relationship in the context of protecting CBRE in major litigation. How have you organized your team to manage the defense of a lawsuit that is covered by insurance and the negotiation of disputes with carriers as a claim unfolds?

LM: We have a strong in-house litigation team, but we also hire and rely on outside counsel in larger matters. When we do, we have a very tight collaborative working relationship with the counsel as we work through the case. As it relates to insurance, typically, we know more about what our insurance carriers want to see than even our outside counsel does and we’re leading the communications with the insurers. For 90 percent of litigation, we don’t have coverage counsel – but we need it in some large cases (and for the occasional one-off question). It’s the really complex cases where outside coverage counsel becomes important. They’re solely focused on communicating with coverage lawyers for insurers and with issues under the policy.

In one large settlement where there were issues around coverage, we gathered our full team at a settlement conference, including our outside coverage counsel (whom I consider our rabbi when it comes to coverage dynamics). And sometimes, when there’s a case early on in which we’re thinking about putting insurers on notice, we bring coverage counsel on early.

CP: Could you tell us about CBRE’s claims experience with its insurance policies over its long history and how you manage relationships with insurance companies to best promote your company’s interests?

When claims occur, that’s when we need insurers, and we’d better hope we have a good relationship and foundation to have those discussions about claims. Now we’re dealing with claims people – and when they think they have an issue, sometimes they’ll hire outside counsel. Not to be cynical, if the insurer can collect premiums  and not pay a claim, that would  be a great  day for the insurer – until word gets around and they’re not getting new customers because they have a reputation of not paying claims.

But if we want to have a reasonably priced insurance program and have capacity to insure our risk, we had better manage risk to minimize claims. You don’t want to buy homeowners’ insurance and leave candles burning by the drapes. Insurers appreciate clients who really take care of basic blocking and tackling around managing claims.

The Negligent Breach of Contract Problem In Liability...

A Ransomware Attack Could Devastate Your Company. Will Your...

View Subscription Center
RELATED TOPICS
claims
Coverage
Insurance
TOP
Trending Share Connect
We use cookies on this site to enhance your user experience. By clicking any link on this page you are giving your consent for us to use cookies.
View Our Privacy Policy
BARNES & THORNBURG EMAIL DISCLAIMER