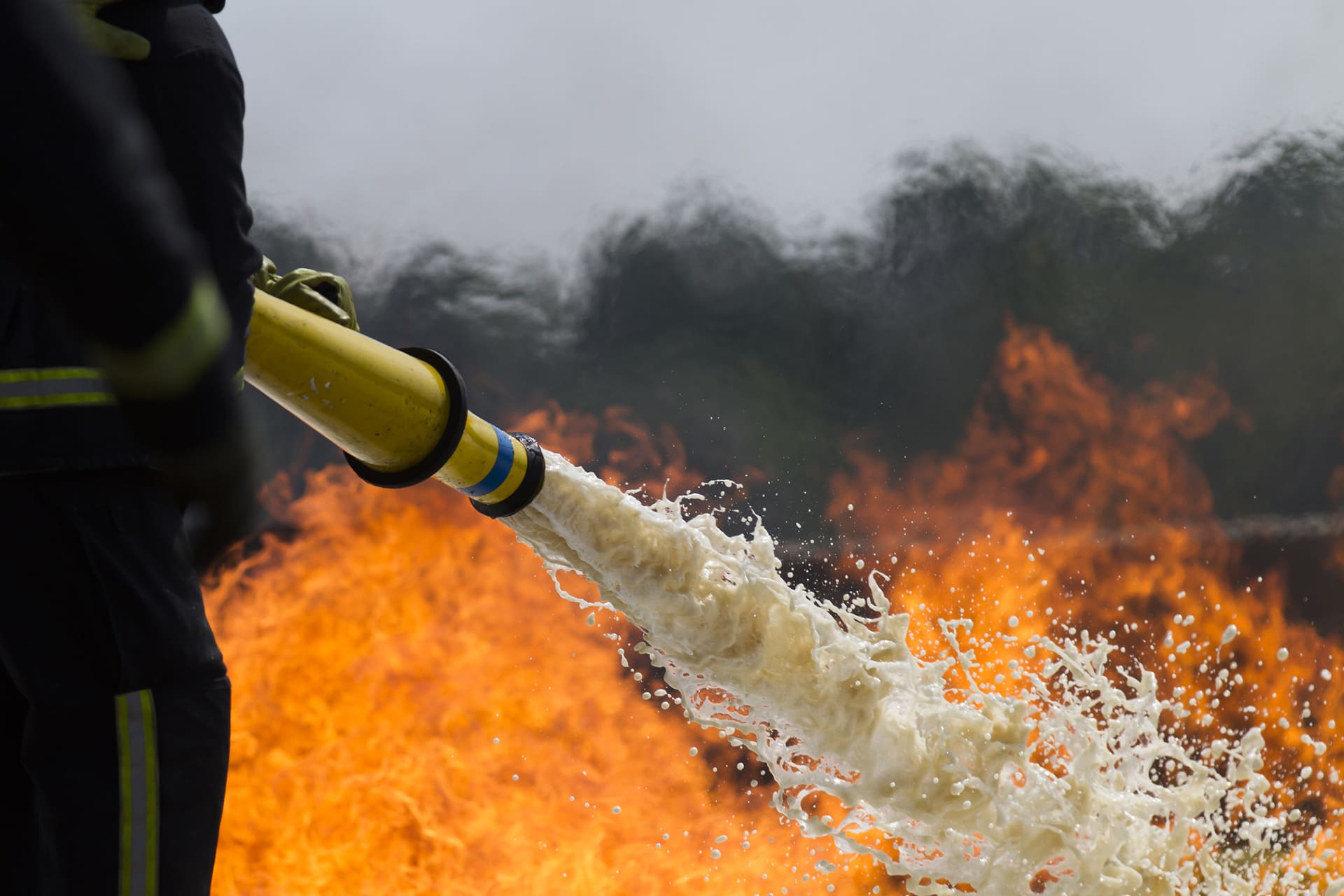 Charlie Denton, an environmental and toxic tort litigation partner at Barnes & Thornburg LLP, along with partners Tammy Helminski and Jeff Longsworth, examine how states including Georgia, Michigan and Minnesota are pushing ahead with legislation while the EPA muddles through the federal bureaucracy.

There is no dispute that firefighting foam containing per- and polyfluoroalkyl substances (PFAS) is very effective at extinguishing flammable liquid fires. This fire suppressant material is also known as aqueous film-forming foam (AFFF).

Although highly effective for fighting flammable liquid fires (like jet fuel), environmental, health and safety concerns have prompted federal and state agencies and legislatures to consider regulating PFAS-containing firefighting foams. Whether and how to regulate these firefighting foams containing PFAS chemicals is a hotly debated topic.

At the federal level, the EPA issued its PFAS action plan on 14 February to evaluate whether and how to regulate PFAS compounds under various federal environmental programmes (including TSCA, the Comprehensive Environmental Response, Compensation, and Liability Act (CERCLA) and the Clean Water Act [CWA]), but the primary EPA focus is on the environmental and public health concerns when PFAS are released into the environment (eg, safe drinking water limits for PFAS compounds, soil and groundwater remedial criteria, etc.)

'While the EPA’s plan may help to fill in some of the regulatory landscape regarding PFAS, the agency also leaves states and regulated parties a bit in the dark regarding immediate regulatory tools to address PFAS contamination'

While the EPA’s plan may help to fill in some of the regulatory landscape regarding PFAS, the agency also leaves states and regulated parties a bit in the dark regarding immediate regulatory tools to address PFAS contamination.

Hence, these PFAS criteria and cleanup issues will continue to be addressed on a site-by-site and state-by-state basis.

As could be expected, these state legislative approaches have varied as to what activities and materials they would prohibit or regulate, how and over what timeframe they would be implemented, and in other potentially significant ways. This article summarises a few of the representative state legislative enactments.

In the final hours of the 2019 Georgia legislative session, House Bill 458 was passed overwhelmingly (159 to 1) to regulate firefighting foam by amending the Georgia Fire Code.

On and after 1 January 2020, the discharge or other use of firefighting foam that contains PFAS chemicals is prohibited. 'PFAS chemicals' is defined to include those fluorinated organic chemicals that contain at least one fully fluorinated carbon atom. This is a very broad and comprehensive definition of the regulated PFAS compounds.

The Georgia law also focuses on class B firefighting foam, which is used to extinguish combustible and flammable liquid fuel fires, like those that might occur at airports, military bases, rail transportation, refineries and other industrial facilities. The Georgia Fire Code, as amended, will now prohibit any fire department or other state or local entity from discharging or otherwise using class B firefighting foam that contains PFAS chemicals, with two exceptions:

Virginia passed a law similar to Georgia's legislation, the Responsible Firefighting Foam Management Act, that restricts the use of PFAS firefighting foams for training and testing, but allows for their continued sale and use during real-world fire emergencies.

The Colorado General Assembly passed legislation on 15 May that is somewhat similar to Georgia and Virginia, but also seemingly more complicated. The Colorado Firefighting Foams Control Act prohibits the use of class B firefighting foam that contains PFAS for training purposes, and violations may result in imposition of a civil penalty. The Act also limits the sale of PFAS firefighting foam, and requires manufacturers to notify their customers of this law.

The Colorado approach also addresses personal protective equipment (PPE) that may contain PFAS compounds, most likely for firefighters, by requiring PPE manufacturers to disclose whether their product contains PFAS compounds. The Colorado Department of Public Health & Environmental (DPHE) must also survey fire departments to determine their inventory of PFAS firefighting foam and information on usage and disposal.

Minnesota, where there have been significant PFAS contamination sites arising from chemical manufacturing and airport activities, enacted a multi-faceted law on 22 May. Similar to other states, the law prohibits class B firefighting foam containing PFAS chemicals for testing or training, unless required by federal law, but excludes from this ban use of AFFF in emergency firefighting and fire prevention activities.

The Minnesota law also requires that any release of class B firefighting foam containing PFAS chemicals must be reported to the State Fire Reporting System within 24 hours.

It also addresses products that contain organohalogen flame retardant compounds as a group, rather than specific chemical formulations, which could be changed or modified to circumvent their regulation. One of the expressed concerns was that in a fire event those flame-retardant products may release PFAS compounds and expose firefighters and residents.

The Michigan legislature is considering (but has not yet enacted) three related proposals for regulation of class B firefighting foams containing PFAS chemicals. The Michigan legislation would include similar approaches to Georgia and other states regarding AFFF restrictions on training and testing; however, the Michigan laws would go beyond those other states to address firefighter health and safety and disposal of legacy AFFF.

Michigan OSHA (MIOSHA) would be required to promulgate rules regarding best practices for storage, handling and use of AFFF, as well as decontamination of firefighters’ gear and other best health practices. Concerns have been expressed about the open-ended aspects of this MIOSHA administrative rulemaking mandate.

The Michigan legislative proposal would also require reporting of AFFF usage so that the Michigan Department of Environment, Great Lakes & Energy (EGLE) can ensure appropriate cleanup.

Another unique aspect of the Michigan law would authorise a state programme for collection of legacy AFFF products for proper management and disposal.

Republican lawmakers in Wisconsin have proposed legislation to ban class B foams used on flammable liquid fires, with two exceptions: in emergencies; or in tests with appropriate containment, treatment and disposal measures. The state Department of Natural Resources (DNR) would be tasked with creating these measures. If passed and signed into law, the restrictions would take effect on the first day of the seventh month after its passage.

On the Democratic side, Wisconsin LRB-2297/2 was introduced on 24 May to comprehensively regulate environmental, health and safety aspects of PFAS compounds (including but not necessarily limited to PFOA and PFOS, as well as PFHxS, PFNA, PFBS and PFHpA). Funds would be dedicated to, among other things, conducting a survey of local and state emergency responders regarding their use of firefighting foam containing PFAS compounds. WDNR could also require persons who possess or control PFAS to provide proof of financial responsibility for remediation and long-term care to address potential remediation caused by PFAS contamination.

Kentucky Governor Matt Bevin approved bill SB 104 on 22 March that will ban firefighting foams containing intentionally added PFAS in products used for training or testing purposes, with some exceptions from 15 July 2020. Their continued use in emergency situations will not be affected.

Although the EPA’s PFAS action plan outlines the steps the EPA is taking toward various regulatory endpoints and summarises the agency’s concerns and challenges, it does not provide immediate regulatory answers or deadlines for final EPA regulatory actions.

'When the EPA ultimately acts, what will be the effect on these previously enacted state laws?'

The fractured and uncertain regulatory environment of different PFAS standards in different states will continue. When the EPA ultimately acts, what will be the effect on these previously enacted state laws? What if the state has a law prohibiting enactment of requirements "stricter" than federal requirements?

There are many questions with which regulators, the regulated community, legislators and probably judges will need to grapple with and resolve over the coming years.

Perhaps Congress will move to preempt state laws; at least 30 bills have been introduced in the US Senate and House of Representatives, many with bipartisan support.

While PFAS-containing firefighting foam is but one aspect of the PFAS regulatory discussion, it is a topic with many real-world implications for protection of public health and safety and the environment. As these variable state laws summarised above indicate, striking a balance between and among the clear need for effective response to fire emergencies while recognising worker protections and public health risks from unacceptable exposures can be challenging.

This is especially so as the toxicological science about PFAS risks continues to evolve, and, unfortunately, trails behind not only our ability to detect the various PFAS chemicals but also our ability to make sense of what we are measuring and regulating by these various initiatives.

PFAS are man-made, emerging contaminants that have been in the news with increasing frequency. While PFAS compounds have been manufactured for more than half a century, it is only in the past 15-20 years that some of the compounds have been linked to various health concerns.

PFAS refers to a family of chemicals, much like polychlorinated biphenyls (PCBs). While there are thousands of these compounds, two PFAS compounds in particular, PFOS and PFOA, have been the ones subject to the most regulatory discussions. More recent formulations, like PFBS or those referred to as GenX, also are alleged to pose environmental and human health concerns.

The Federal Aviation Administration (FAA) requires that commercial US airports use – and even train with – firefighting foam that meets the Department of Defense military specification, (MilSpec), which specifically includes PFAS.

AFFF used by the US military must meet the requirements set forth in Military Specification MIL-F-24385F, which is under the control of the Naval Sea Systems Command, Code 05P9. The Naval Research Laboratory is the designated institution for certification evaluation for the Department of Defense (DoD) AFFF Qualifying Products List (QPL).

The views expressed in this article are those of the author and are not necessarily shared by Chemical Watch.

This article was re-published with the permission of Chemical Watch.

View Subscription Center
RELATED TOPICS
PFAS
EPA
TOP
Trending Share Connect
We use cookies on this site to enhance your user experience. By clicking any link on this page you are giving your consent for us to use cookies.
View Our Privacy Policy
BARNES & THORNBURG EMAIL DISCLAIMER